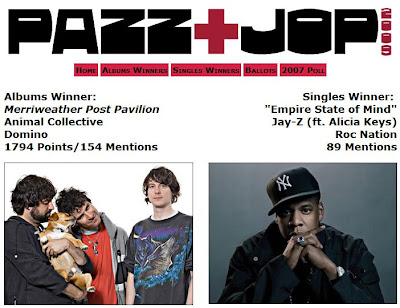 So the Village Voice in New York came out with its annual Music Critics Poll. Yup, I'm up in it, with 696 other fellow critics. We gave points to 1,934 albums from 1,838 artists and here's who rose to the top. I sort of like the balance between AnCo and Jay-Z. This may be because I am the 168th most centric music critic in the country, a little less centric than Rolling Stone's Caryn Ganz, but much less eccentric than former VV editor Robert Christgau. Don't know how to take that. ...
Update: J. Fleuti notes I have moved to #187, which makes me 187 on the muthafu@#in Jop.
Labels: select clips